On the weekend of the 2/3rd November some of the Laser fleet (William Whittaker (Rear Commodore Sail), Marcellus Pryor (Laser Fleet Captain) Willian Cooper (the yoof) went on a foray to Grafham Water to partake in the annual Laser Inlands Event.

The important thing to understand about these sorts of trips is that they’re a great weekend away with some sailing, we don’t really expect to challenge the leaders as we’re too old, unfit and lack the required talent.  That said they’re great weekends as you’re sailing in the presence of c.100 other Lasers with World Champions past, current and future!

Unfortunately due to the forecasted gales the organisers decided it prudent to cancel the Saturday which made it a one day event which was a shame, as much like the Fireballs found at DWSC the weekend prior, it was more than sailable on the Saturday afternoon and would have favoured us.  But as we were committed to hotels and entry fees we decided to watch the Rugby, have a spot of lunch and then head over.

So, we did some boat fettling before we loaded the boats, set off to Grafham, which has a strange looking pillar box/high rise block of a club house.  Once registered, we headed off to Huntingdon to prepare for the following days racing, with absent fleet members never far from our thoughts!

After an early night (not) we awoke early to make sure we were fuelled for the long days racing as there were going to be 4 races, back to back, with a target time of 50mins per race, again it was back to Wetherspoons!  Race Briefing was at 08:45 and William lead the way with making sure he was fully hydrated… 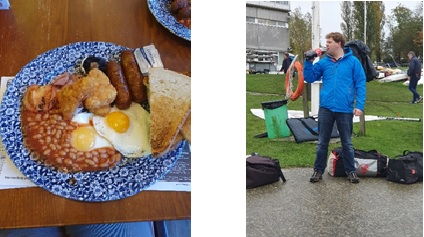 We launched at about 09:20 into a very gentle breeze which got less throughout the day and returned to shore at about 16:15 by which time William was perhaps regretting his decision to drink 2ltrs of Coke before launching and spending nearly 7 hours on the water!

As predicted, we didn’t challenge any top tables, with not even a mention in the official write up and to save you scrolling we finished;  15th for Will W,  20th for Will C and 23rd for Marcellus.  It’s all about taking part isn’t it?

For a more official version of events -see HERE!