So how did it all begin? Draycote reservoir was constructed in the mid 1960s under the direction of Rugby Corporation Water Department.

A small group of people led by Sir Charles Barratt had the vision of a sailing club on the reservoir and in 1968 called for a meeting of interested people by public notice in the local Press to be held in the Rugby Benn Memorial Hall.  Bearing that there was little water in the reservoir at that time, the response was overwhelming which encouraged those founder members to approach Rugby Water Board and negotiate a lease which resulted in Draycote Water Sailing Club coming into being in 1969.  The lease was conditional and the Club had to commit to a variety of works and site development to confirm the long term intent to base a sailing club on the site.

The Entrance fees and Subscriptions for these first members was as follows:-

With some 850 memberships and 600 dinghies, with a pledge not to go into debt and only the first subscriptions in the bank the membership organized weekend working parties to meet the need of site development, prepared the dinghy berths and laid concrete slipways. Sailing was for the enthusiastic only with little water in the reservoir, thick black mud and a start line from a small wooden hut on the foreshore. With no clubhouse changing was performed behind the car in the car park and a cup of tea was available, courtesy of the lady members, from an ex site contractors hut in the top car park.

The reservoir was eventually filled and with confidence for the future of the sailing club, and to protect the members financially, seven Founder members applied for the Club to be formed into a Company limited by guarantee in February 1970 and a formal lease was granted.

With the help of a grant from the Department of the Environment the clubhouse was commissioned, built and opened in 1971.

Sailing was initially based around a menagerie fleet which saw some strange craft at the club but over a short time popular classes emerged, the Club specified which classes of dinghy were preferred and the fleet concept and structure was born. This was the time of big fleets of popular dinghies, Mirror 10, GP14, Enterprise and Fireball all of which could be built from a kit by someone with average wood working ability. Such was the popularity of the Mirror 10 that numbers at the club were capped at 120. The backbone of the Clubs activities being racing these large fleets required an effective form of communication which was successfully achieved through the fleet Captains structure and a regular printed club magazine.

The first five AGMs were held at the Benn Memorial hall due to the uncertainty of the number of members that would attend, the first to be held in the clubhouse being in 1975.

In 1974 the Severn Trent Water Authority was created and took over a considerable number of Utilities among them the Rugby Water Authority and so became the new landlord of the Sailing Club. The terms of the lease remained unchanged with DWSC being the sole tenant and members of the public being allowed to walk the perimeter only if they bought a walking permit.

Essentially a dinghy racing club development over the next nine years was based around the popular fleets and weekend and Wednesday evening racing.

From 1984 the character of sailing changed with the introduction of windsurfing. Initially membership was opened to 30 windsurfing members for a trial period of a year in order to examine the new form of sailing. The first year was deemed to be a success and the limit was removed. The growth in windsurfing, their desire to use the club any day it was windy and some dinghy members wishing to cruise on a weekday brought about the 7 day a week opening of the club.

The Open meeting period was set during the months of September, October and November and was the era of the big Open Meetings with entrants regularly hitting the 80 mark in most classes. The Club also ran an invitation Open in March where all of the dinghy class associations were invited to send their top two crews and the DWSC fleets also entered their top two crews. This was the Silver Salvers event sponsored by Nathan the Jewellers of Birmingham. The winning boat receiving Rolex Oyster watches.

Training became an important feature of the club during this period. It was organized and run wholly by part time enthusiasts who not only were qualified instructors but also very capable handymen doing any and all necessary repairs. The Club eventually became an RYA Recognised Teaching Establishment which grew from dinghy sailing to encompass windsurfing and power boat instruction. Such was the success of the training reputation of the Club that each year there was an Optimist summer camp held for a concentrated course of training.

From the mid 1980s to the mid 1990s there was a marked shift in the classes of dinghy being demanded and sailed at DWSC. Dinghies like the GP14 and Enterprise disappeared from the club scene as members demanded higher performance boats. The Club recognized that dinghy design was going through a development phase and opened membership to wider selection of classes.

1994 saw the beginning of another change in DWSCs development with the announcement from Severn Trent Water (STW} of a ‘Draycote Water Management Strategy’. This strategy proposed increased public access and the development of major visitor facilities.

In 1996 Severn Trent Water approached the Club with a proposal for a combined visitor centre and sailing club to be partly funded by a joint application for Lottery funding.

During the discussions STW proposed that the Club join with the Authority, to form a Draycote Water Trust, of which the Club would play a major part and manage the site activities, and the Club would be granted a new 28 year lease. Two years later in 1998 building plans were finalized and in 1999 the grant application was submitted. However, the Lottery Grant application failed due to STWs commercial interest and the scheme was abandoned.  This was the beginning of a long period of increasing numbers of the visiting public, STWs desire to build a visitor centre and the Clubs desire to protect its interests and achieve a new lease.

Into the 2000’s and the growth in popularity of the asymmetric dinghy classes and the introduction of “windward/leeward” courses to compliment the “round the can” racing for the ever popular traditional dinghy classes. The “windward/leeward” class racing had the bonus of the introduction of the Draycote Dash Open meeting which is a worthy successor to the Nathan Silver Salvers.

The Club saw several modernising developments with the first Club website being launched, the introduction of an Access Control system, and the hiring of a Club Manager to deal with the day to day needs of the Club and thus taking pressure off the volunteer Committee.

The biggest milestone was the securing of a new 15 year lease with Severn Trent.  Following the grand site development plans of the 90’s, a new lease was needed that was more appropriate to the needs of the Club within STW revised plans.  STW continued with their revised plans of a new Visitor Centre and improved parking to attract increased members of the public to the Draycote site.

Club Members also enjoyed several years of Inter-Fleet Championships.  A day of fun and games both on and off the water, for all fleets and ages where short course races were the mainstay of the events, with onshore entertainment also on offer.

The recession and economic crash of the late 2000’s saw our Club take losses of £80k over 5 years and our finances were in a woeful position.  The Committee were faced with the need to take drastic and decisive action to turn improve our chances of surviving.  Immediate cost-cutting exercises were done along with plans to make the Club more efficient to run and

It was vital that the Club attract new members and we drew on STW’s increased public footfall to Draycote by starting our annual Open Day initiative.  A day each April was set aside and widely promoted to welcome non-members to come along to try sailing and windsurfing.  A wonderful team of Club members volunteers each year to run the events and with hundreds of visitors looking to sample new sports, it is an ideal to way to promote membership and training courses.

With the Clubhouse largely empty during the week, it was decided to hire the Lounge and training rooms out to local businesses for meetings and events.  In 2017, this was further expanded with our corporate offering rebranded as ‘Draycote View’ along with a dedicated website.

In 2019, we introduced Stand-Up Paddleboarding to our activities list following increase enquiries from the public.  There has long been an argument for a more flexible activity with ‘pay-and-play’ offering at Draycote, as well as pressure from STW.  We hope that SUP welcomes new members who will in time be interested in trying sailing and windsurfing as well.

2019 saw our Club celebrate 50 wonderful years of sailing at Draycote and a host of events were arranged to mark the half-centenary occasion.

This video was played during our 50th Anniversary Party and features pictures and videos from our Club’s history.

Photos from our 50th anniversary events – from the Party in April, the Midlands Champions Race in June, and then our visit from Princess Anne.

As we now move into the 2020’s, we are thrilled to report that we our Club is in a very healthy position now.  We are about to embark on more major refurbishments with the ladies changing rooms, and are proactively working on promoting our Club to the wider community to ensure new members join and continue to breathe new life into our Club.

A new lease has again been secured following many months of discussion, and this one has been agreed for until 2035 which gives us security for the coming years.

We are still in the midst of the Covid-19 pandemic as this is written, and time will tell what impact it has on our community, sport and the Club as a whole.  Our Committee are working closely together to consider all outcomes and eventualities so that we come through this period with a strong and positive outlook for the future.

Since the Club started, a regular printed newsletter has been given to members with updates and information on events, racing, social activities etc.  The newsletter was later rebranded as ‘Draycote Unshackled’ and, as digital communication has become more popular, has since become an annual round up of Club activity, culminating in the special edition to celebrate our 50th anniversary. 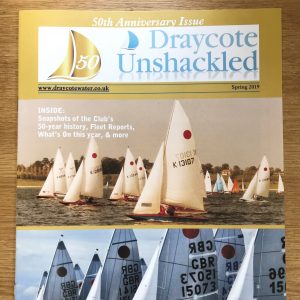